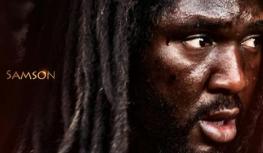 While recovering from a very, very bad cold I’m sticking my head in and out of the History Channel’s epic series “The Bible”. Much props and thanks to producers Mark Burnett (The Apprentice & Survivor) and his wife Roma Downey (Touch by an Angel) for bringing to a new generation ‘The Word’ in a modern technology presentation. I watch a recent interview with them and how they felt the older movies like the Ten Commandments, The Robe, Ben Hur and others didn’t do it for this generation. I also really appreciate the diversity of appearances / actors they casted to portray heroes and sheroes in the Bible. My only concern is how sometimes we may risk authenticity for creative license.
Point and case…. When it was time for me spiritually to stop eating baby food and start eating meat. One teaching turned revelation I’ll never forget is the probable truth about Samson. When you read about him (Judges 13) and what happened it never tells or describes him being muscular. A matter of fact the biggest consistent issue in the story is that everyone wanted to know where he got his strength from? The quest was to find out and know the secret to his strength. If he had visible muscles the way he’s always portrayed in films and drawn paintings why would we have to ask “Where does his strength come from?” it would be obvious!
The fact that his body was probably so average and normal is what makes the story of Samson so historic, astounding, miraculous, incredible and powerful! The truth is that God does things through the unexpected, unbelievable and ridiculous. I’ve learned since that revelation in addition to many others to go to the source first and then filter anything else after accordingly.

To Golden Fog In regards to your request about my thoughts pertaining to the 2012 Grammy Nicki Minaj performance. I’m going to be very careful and avoid being judgmental because that’s not my assignment. But what I will share is a piece of something I’ve been holding on to and going to show in my biomentary that will one day see the light of day.

A very long time ago I watched a Bugs Bunny cartoon I would never forget. It was a episode where he and Daffy Duck was trying to out do each other on stage and Bugs kept winning. Long story short Daffy decided to swallow dynamite, gun powder, kerosene, fire works and then he finally swallowed and match and “BLEW UP”! The crowd went wild, standing ovation and all. It was evident that Daffy ultimately won. Bugs Bunny even applauded, gave Daffy his props and on behalf of the audience begged for a encore. Daffy with regret had to decline and explained as he ascended with wings on his back that he could only do that trick once!

The entertainment business is about out doing each other and in the process there are causalities too that consist of children that know any better. Now we enter into the another realm, the spiritual one. When I think about what I was almost willing to do for people and a statue when I didn’t know any better, I thank and praise God for his mercy and grace because for the sake, worship and chase for the applause it’s a good chance that they’ll be no wings and ascension. Please be blessed.

This morning during my daily walk, talk & meditation with God I felt move to ask him “How was your birthday celebration this year”? (I speak to him in the pass tense in regard to days because he’s already been here and is up ahead). The Spirit answered by bringing to mind Eddie Murphy‘s “One Night Only” celebration. Eddie said something in his closing remarks and thank you’s that was very profound to me and for some reason I couldn’t forget it and now I think why was for this divine response from the Lord.

Eddie said “This whole night made me feel like you do when a bunch of people are singing Happy Birthday to you and it’s so long that you start feeling a little embarrassed and uncomfortable. That’s how I felt for over 2 hours.”

At first I personally thought that was a little rough, but nevertheless it was deep. Because what can make it uncomfortable especially in this business is knowing that not everyone singing the song is as sincere or loving as they appear. Knowing that some of the things said and done in the name of congratulations has an agenda and selfish motives. God was telling me that’s how he feels at times in these Holiday seasons. Using his name and purpose for things and actions that have nothing to do with his birth in Jesus the Christ.

Now I’m like wow… especially knowing that I’ve been one of those for most of my life that have sung Happy Birthday remixed and packaged in Christmas carols and didn’t realize it like I really do now. I thank God that He’s not a God of second chances. He’s a God of MANY chances gift wrapped in Grace & Mercy. Merry Christmas everyone and please remember the reason for the season. 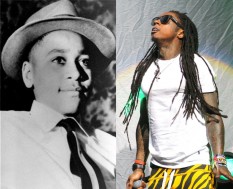 I’ve heard and read the news about the unfortunate disrespectful lyrical metaphor Lil Wayne chose to record that refers to the murder of Emmett Till (R.I.P.). Being a news producer with Brand Newz an organization that decided when launched to promote positive, informative & encouraging news from and about people / events around the globe. Using the influence of Hip Hop culture as a platform.
When it came to this particular story I chose to allow other news sources to report it. However it had escalated to the point where I really wanted understand what good could possibly come out of such an act getting such attention. Then it dawned on me (Thank you Holy Spirit).

As rough as this way may be there’s no doubt that so many kids / people who had no knowledge of Emmett Till now know. Please believe when when I say… That if you went to the streets before this happened and randomly ask anyone Wayne’s age group, even a little younger or older who Emmett Till was they sadly would not know.

Point n case: Ever watch Jay Leno or any late night comedian do their man on the street skits asking and showing people of all ages and races pictures of game changing people in history who they are. Most they approach don’t have a clue!

I believe when most of the unknowing heard or will hear Wayne’s lyric they’ll respond with “Who’s Emmett Till” thinking he’s some great womanizer Wayne admires only to find out he died, how and why. Now hopefully a history lesson begins they’ll never forget.

So whether we like it or not (and I admit I don’t) Lil Wayne has educated thousands in a very unorthodox way. 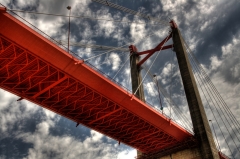 The music Bridge, Break or the Get Down part in a song.

As usual in my travels while flying anywhere from 3 to 5 hours, waiting for connecting flights and setting up my portable system in the next hotel room. My personal music preference are the sounds of the 60’s, 70’s, 80’s and some early 90’s. But recently something interesting occurred. I’m not sure if my ear’s popped from all the travel or was it late reaction and revelation cause by great discussions and border line debates with friends in facebook forums? I finally notice the reason or in part what separates today’s R&B and Soul music from yester-year’s. There’s no Bridge! Where did the Bridge go!

The musical bridge or instrumental portion was the opportunity for the listener to let the words / lyrics sung in the song prior to sink in. Giving us an opportunity to really think about the words that usually had a message and meaning to get inside. Sometimes the second verse right before the Bridge was so powerful to and from the Writer and, or Producer that it was repeated again as the last verse before the song faded out to the end.

Mind you, what was said / sung in those songs wasn’t comprehended at first. If you’re like me sometimes it takes repetition from a radio station’s repetitious playlist, in a club D.J.’s set and my personal music devices repeating my favorite songs before one day after I finally say aloud…. “Hey… Oh wow I didn’t know that’s what this song’s about!”

Up until the late 80’s maybe early 90’s every R&B and (believe it or not) Disco record sometimes had at least a 45 second instrumental section in the middle of the song after the 2nd verse that eventually inspired Hip Hop music culture titled “The Brake”.

I strongly believe that the extinction of ‘The Bridge’, ‘The Get Down’ and ‘The Brake’ are because most of the words / lyrics today have become empty, have no substance and are soulless. If we did bring back the bridge today maybe, just maybe it will give us the opportunity to stop and think about what we’re subconsciously digesting in our ear gates, inner beings and spirit person.

Liken it to junk food. a food that not only lacks any nourishment, but actually over a period of time destroys the body. Don’t know about others but there are times that I need a bridge.